When the skater coats my stripes

Today and for part of the week I officiates as a stylist starting from pieces bought at H & M. Jordane had a little trouble to reappropriate her body now and I wanted to show her that she has more possibilities than she thinks.

The relooking beginning of her obsession with stripes.

There is little time Jordane has an article about stripes because she really love this print.

When I read the article, I thought it would be a good idea to redo it in a continuation of the previous proposing looks with stripes with my help.

Well, on the stroke she panicked because she has grown and does not feel great about yourself. So she was afraid of looking ridiculous, vulgar or even bigger wearing stripes.

Cristina Cordula really does damage by preventing stripes to curvy women because although they say they don’t consider her opinion the unconscious it retains.

I must say that I also wanted to help reclaim this new body in which she is not feeling well and that it takes the habits she had when we met a few years ago. Her habits of which I speak are to let herself go in fashion / image, to want to clear up almost go out not knowing what to put and feeling heavy.

There are people who feel good with significant weight gain and are able to find how to reclaim this new body and deprive themselves absolutely not to live. Others like Jordane (or sometimes me) are struggling to manage this morphological change that makes them sink into a depression, to the point of getting to deny, deny at all that of an obstacle flesh. So, it was more the necessary perspective to realize that we must think her body otherwise (time to regain possession of it), and that more than ever the pampered and to praise that does if only psychologically ease the feeling that the body that we live as something that disgusts us (and this is the case for Jordane currently) no longer trapped in this paradox body seen/ lived body.

This is not because our head–misleading us and makes us believe that we are horrible as it is reality.

We confuse pathological symptoms associated with a large weight gain such as joint pain, shortness of breath at the slightest exertion, sleep apnea and so on that they are related to the lived body and the way others perceive this body which is not at all the same thing, hence my point of the lived body and perceived body that is a clinical term that is tangible when one takes the trouble to understand.

In passing syndromes I described are certainly more common among fat people, but thinner people can also have and larger people may well feel nothing of it. Each body has its own story and generalize is not a good thing and I wanted to clarify this detail.

So back to Jordane which is a little pain right now and I’m trying to get out of the quicksand in which she stuck her body that she perceives as horrible but especially a handicap for autonomy.

I can’t take away her feelings but I can allow her to reclaim the pending otherwise implement things that will enable her either to lose weight or not to lose but the tone as she would like.

Jordane recent months dresses as if she had 40 years then she’ll be 27 on June 9.

She wears the same outfit for months and drags her body like a ball, it pains me.

As I know she still has a taste for fashion and that there are specific things she loves like prints, stripes and flowers, I took advantage of her article on the stripes to give it want to love again and realize it takes « just » that restores body and aesthetic to this body did suffer now.

If I put quotes for « just » is because-I am aware that this is easier to say or write, to do and what he must first begin to « treat » it is the mind.

I suggested we do looks with dresses in printed stripe and although she bitten her lips (what she does when she‘s afraid it’s touching) she agreed because she understood that it also will gain confidence.

We went to H & M, she tried some stuff and after her choice I proposed we make several looks of styles for the blog but especially for her.

I’ve done as usual when I officiates as a stylist for her or other women I asked her to give me a direction and especially tell me the styles she likes at the moment but does not know how to apply on her.

It is starting from this that I show you 3 looks that I proposed and she loved and who have given her want to dress again because it’s still the original purpose of this session relooking.

For the first look, she wanted to turn the dress with black and white striped top and associate it with a black skater skirt I sewed it there long. 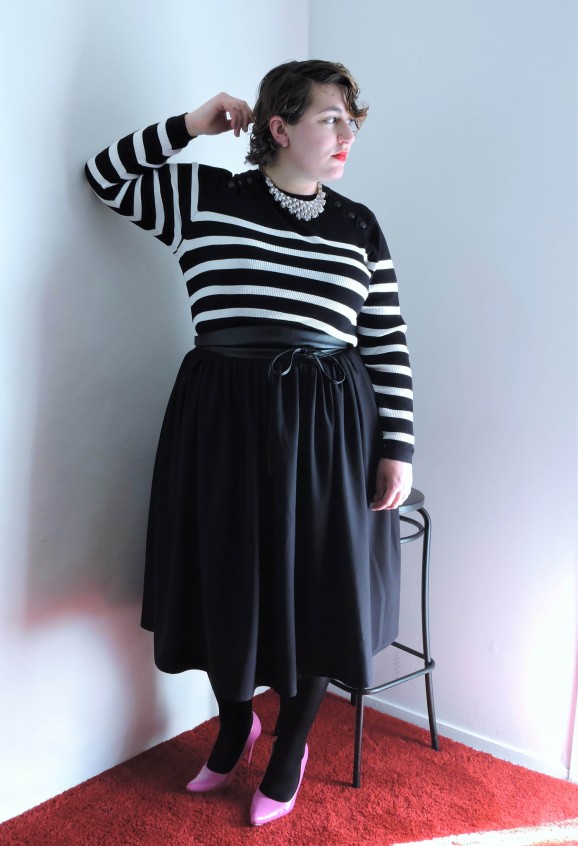 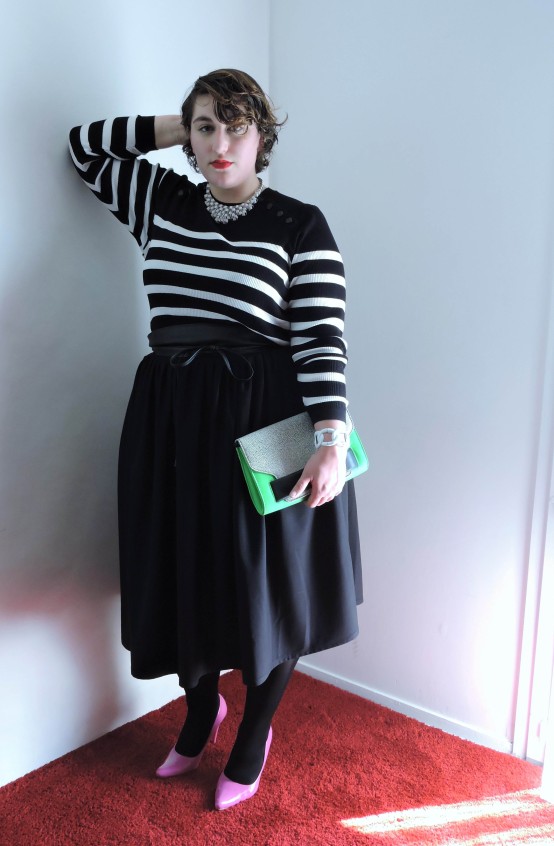 To break the bi-color side we accessorized with a pink jacket from H & M that had long, varnished shoes pink from the new collection of Bonprix and that green jacket bought it years ago at H&M. 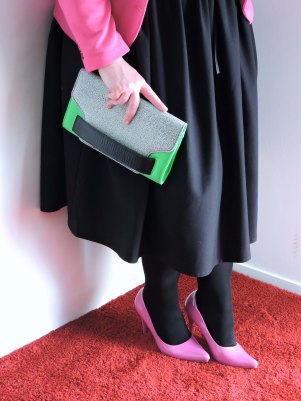 Jewelry accessories we kept the black and white theme, and we opted for a white collar and a bracelet at Promod which are also an ancient collection. To accentuate the skater side of the holding was used a black obi belt from the current collection of Taillissime La Redoute. 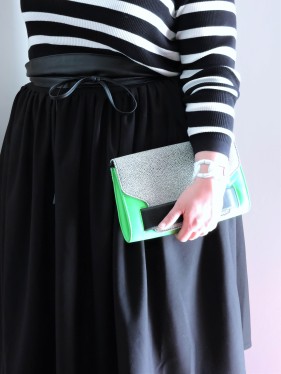 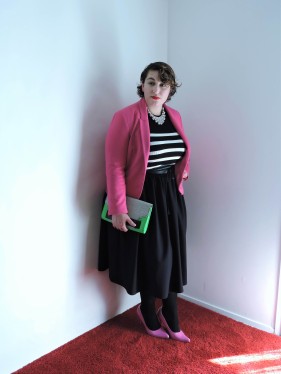 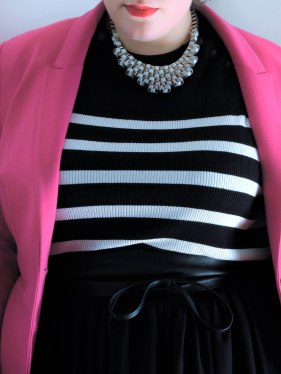 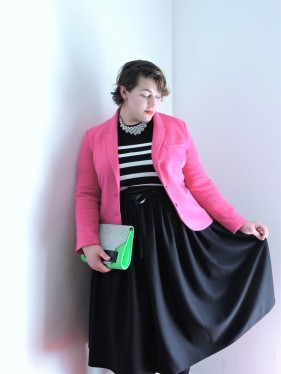 I also propose you a second accessorizing with black and yellow peep toe fluorescent bought from Bonprix ago 2 years and a yellow bag from Zara an old collection. 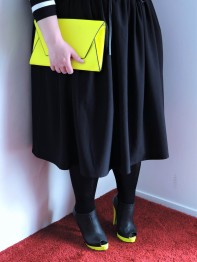 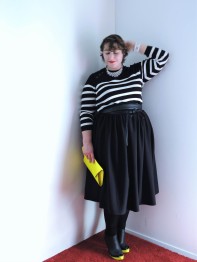 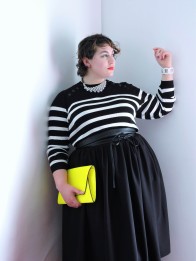 Jordane was able to realize that her waist had not disappeared despite her weight gain and doesn’t look like a huge barrel as it seems to believe.

For me, Jordane is still beautiful and I hope Jordane you going again to want to take care of you now that you find pretty again.

See you tomorrow for the rest of this week struck on the blog…
Ciaooooooo.

Meanwhile tomorrow I leave you with this little video…